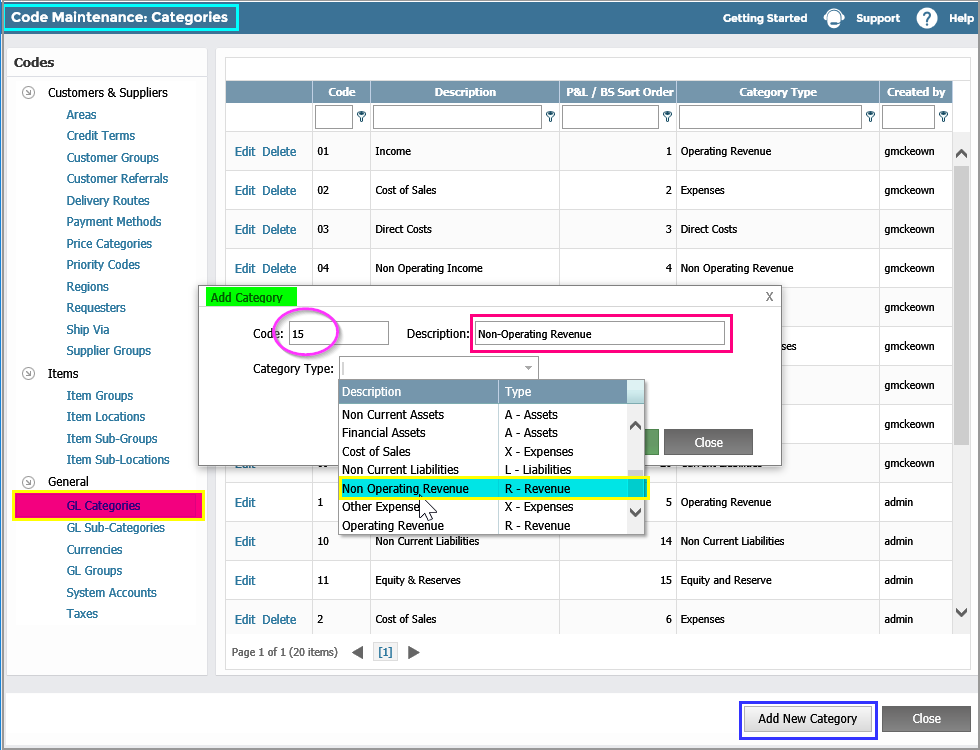 You can also determine its position in these Reports by allocating a “Sort Order Code”.  The General Ledger Categories will appear in ascending numerical order of Sort Order Code in the Chart of Accounts starting with the number 1.   If you decide to change a GL Category’s position by changing its Sort Order Code or you add a new GL Category with a new Sort Order Code then, on “Save”, by ticking the box “Re-Sort sort order”, the sequence will be re-ordered.   In the example below, “Operating Income” will be the first line on your Profit & Loss (Income & Expenditure) Reports followed by “Cost of Sales” and “Direct Costs”. 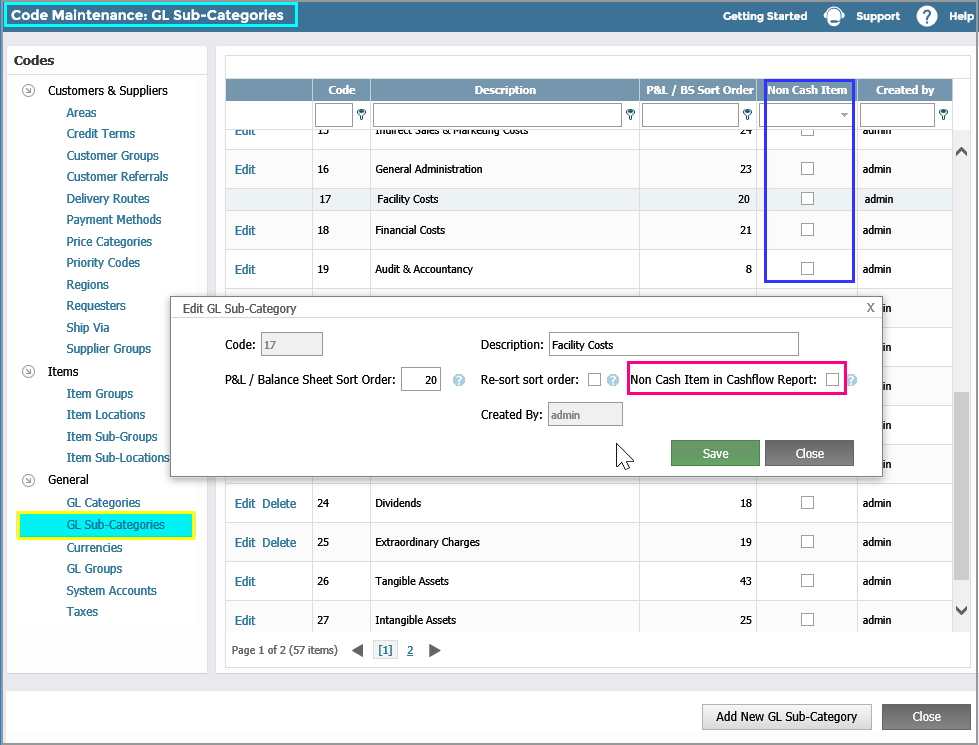 There is a more detailed explanation of the role of GL Categories, GL Sub-Categories and GL Codes in the preparation of Financial Reports in the Article entitled; “How do I Modify or Re-Design the Layout of the P & L Reports

There are several ways you can extend the pre-defined set of General Ledger Codes;

(i)    You can add New Codes in the Gaps between the existing ones;

In this instance we have extended the number of Sales Accounts by adding new Codes 1012 to 1018.

(ii)    You can use suffixes to expand an existing Code as in this example;

(iii)    You can set up completely New Codes, as in this example; 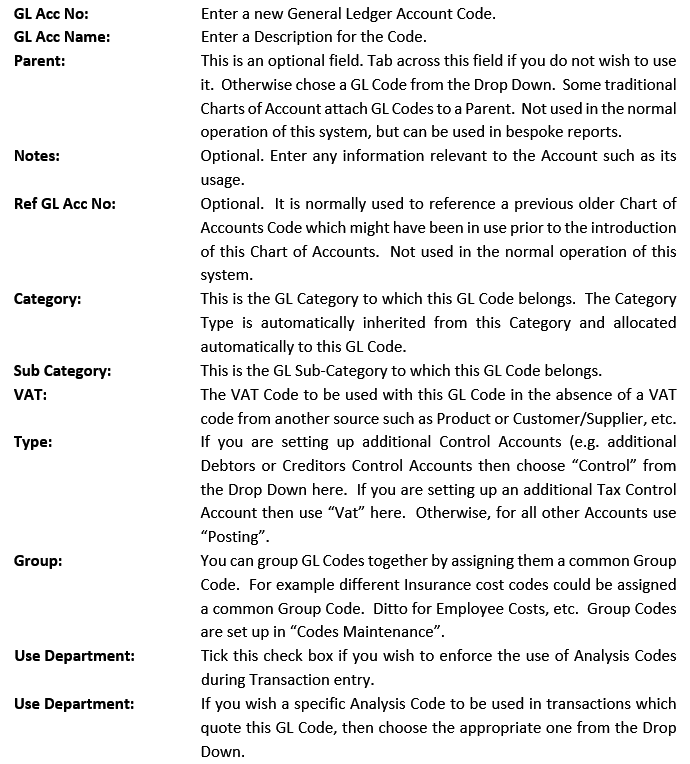 Finally, click on “Process” to add the new GL Account Code to the table of General Ledger  Codes.

General Ledger  Groups do not feature in the hierarchy of the General Ledger Coding Structure. They are optional, but serve as a way of viewing and reporting of General Ledger Codes which fall into various collections of Revenue, Cost Accounts or Balance Sheet Accounts. For example you can group all Insurance Codes, or Employee Costs, and so on.  You can use these to refine Enquiries and other Reports;

The pre-supplied Standard General Ledger Code Package is fully comprehensive and extensive in the expectation of catering to the needs of many different types of businesses - and therefore necessarily extensive and lengthy.  In many cases – overly so.

It is therefore recommended that you should “prune” or tailor this pre-supplied pack to reflect the actual needs of your business.  Just as it is important to add or extend some Coding areas, it is equally important to get rid of unwanted Codes in order to reduce clutter.  One example where this will prove useful is in the area of budgeting.  If there are many un-used General Ledger  Codes in the system then the Budget preparation documents and spreadsheets will be unnecessarily complicated with the inclusion of these un-used Codes.   Another example is the case of unwieldy General Ledger  Code Lookups or Drop-Downs.  And, don’t forget that, if you are overly zealous in your “trimming”, you have always the option of adding back GL Codes later on.

N.B.  You can only delete un-wanted GL Codes if there are no transactions in the system with this particular GL Code recorded against them.  If this is the case, when you Go To > General > Add/EditGL Codes, the Delete button will be highlighted.  In all other cases this Delete Button will not appear.

So, it is particularly important that you carry out the “pruning” process before you commence the introduction of transactions as part of the system go-live.

Finally, you can also use the Edit facility to change the meaning of your existing GL Codes by changing the GL Code Description and the GL Category and Sub-Category it/they belong to;

To setup a new General Ledger Control account follow all the steps as per point 3 above with one exception.

Ensure that the Account Type is set as 'C' - Control.

Click Process to Save the new General Ledger code.

To do this go to Setup > Codes Maintenance > System Accounts 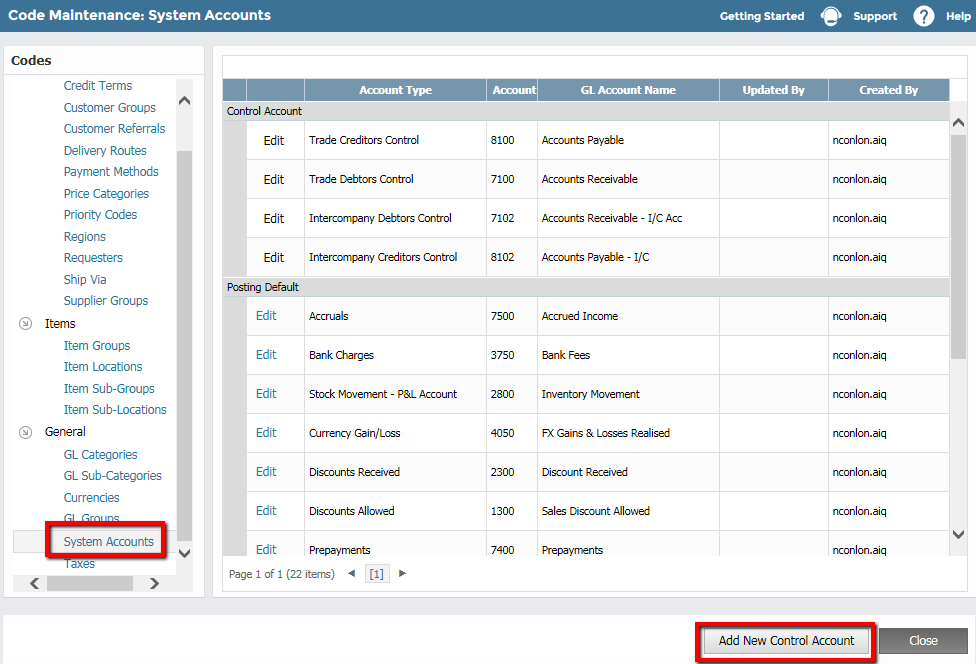 How do I Use the Bank Statement Scanning Facility (AutoRec)?

How does the Purchase (Un-Ordered) Product Invoicing Work?

1.     Introduction: You can operate the Purchasing System without Purchase Order...

How do I Carry out a Bank Reconciliation?

Introduction  You need to reconcile, from time to time, the system’s view or unde...

How do I Process Sales Receipts and Allocations?

1.     Introduction: There are two functions on your Sales System Menu by which y...