The Company Financial Calendar is established during the initial Company setup process where you can set the number of Periods in a Financial Year, their Start and End Dates, the current Financial Year, etc. After that, it cannot subsequently be amended - but if, for some reason it becomes vital, you’ll need to contact your System Provider to effect such a change. 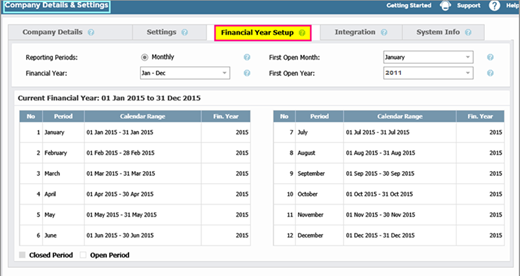 The system will allow you to operate without closing Periods and Financial Reporting can be carried out on all open or closed periods.  Clearly though, you should be aware that if you produce your final monthly report pack for a period or year, there is then a danger, if you do not close out the period in question, that postings can occur to that period and render the financial statements inaccurate.  Closing periods in a timely manner will prevent this.

You do not have to close all Ledgers at the same time.  You can close Sales, Purchases and General Ledger separately - but you cannot close the General Ledger until the other two have been closed.  And remember, you can produce all Reports independently of whether Ledgers are open or closed.

Finally, you cannot close the last Period in the year for any of the Ledgers – this must be carried out by the year end process.

Make sure that all Sales related Transactions for the period in question have been entered and Posted. You will not be able to enter any further Sales Ledger transactions after the period has been closed.

For reassurance that all is as it should be, you might want to run the “Debtors Control Report” in the Sales system and compare the results with the “Balance Sheet – Period Summary” in the General Ledger system; 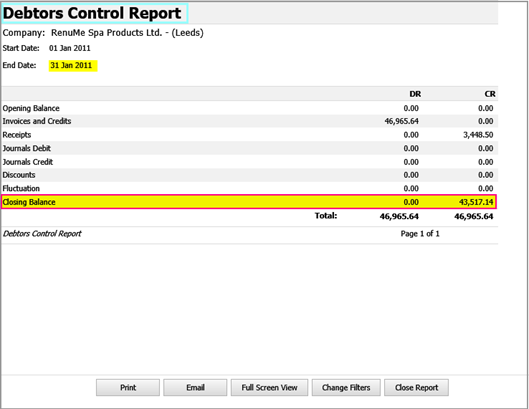 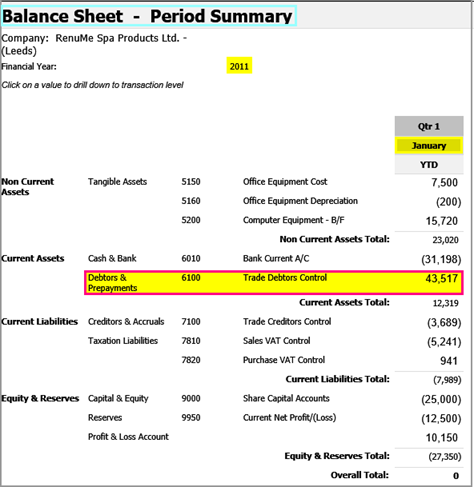 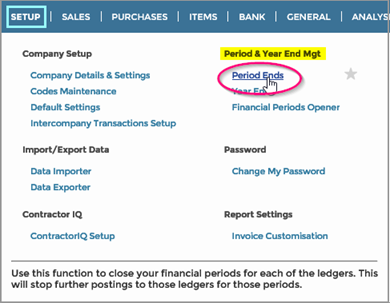 The current open period and financial year (i.e. the one after the last closed period) will be automatically presented.  To effect the closure, click on the Tick Box as illustrated below followed by “Process”. 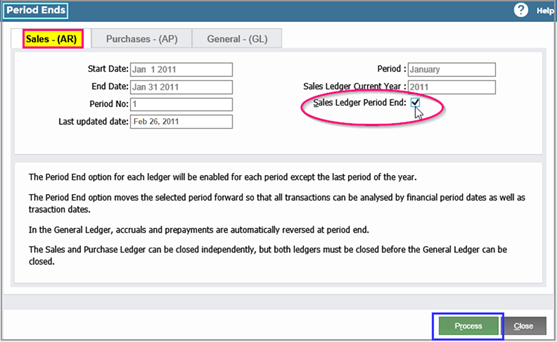 The system will now roll over the “Current Open Period” to the next one for the Sales Ledger.

Closing the Purchase Ledger is very similar to the closure of the Sales Ledger described above.

>    Ensure that all Purchase Transactions for the period in question have been entered and posted.

>   Compare the “Control Report Creditors” in the Purchasing System with the “Balance Sheet – Period Summary” in the General Ledger.

This will result in the closure of the period in question and will inhibit the entry of any more transactions with a transaction date within the closed period.  The “Current Open Period” for the purchase ledger will also roll over to the next period.

The General Ledger will now be closed for the period and the “Current Open Period” will now be rolled over to the next period.

The Financial Year End routines can be found here; 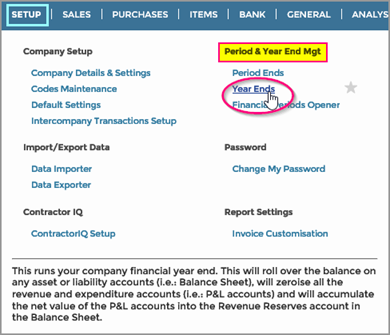 Like Period Ends, the Sales, Purchase and General Ledgers year ends can be closed independently of each other – but you cannot close the General Ledger until the other two have been closed. 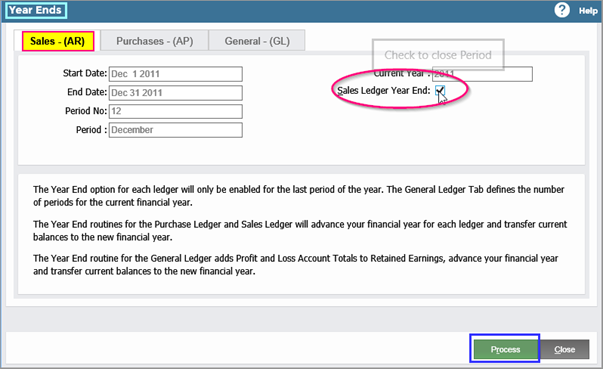 You will not be able to close the Sales Ledger for the Year unless the current open period is the last one in the financial calendar.  Click the Tick Box as shown, followed by “Process”.  This will then inhibit any further Sales Ledger postings with a Transaction Date in the year just closed.

The Current Open Year and Period No. will now be set to the first period in the following year according to the Financial Calendar established when setting up the Company in the first instance.

5.3        General Ledger:   Before closing the General Ledger it is advisable to check on Accrual, Deferred Revenue, Provisions and Prepayments Accounts in the Balance Sheet in order to deal with Over and Under positions.  Afterwards, click on the General Ledger Tab and follow the same instructions as provided for the Sales Ledger.

After clicking on “Process” the system will;

>    Advance the Current Period and Year to Period 1 in the following year,

N.B.       None of the foregoing actions will inhibit the forward postings of transactions. So if your Current open period is period 12 you can leave it like that for some considerable time if you wish and you can still post transactions as many periods as you wish into the next year.  And you can also run your all Financial Reports, Sales Reports, etc., for those forward open periods.

How do I Re-open Financial Periods?

1.     Introduction: In certain circumstances it may become necessary to re-open ...

1. Introduction     Before you can use Sales or Purchase Orders and Item invoices...

How do I Navigate the General Features and Facilities of the System?

1.    Introduction: This latest Edition of the System is now available under the ...

How do I Use the On-Line Documentation and Help Features of the System?

1.   Introduction:     Accompanying the system is a comprehensive set of On-Line/...