The system facilitates the operation of multi-currency accounting with as many currencies as you require against a single Base Currency (i.e. the "Home" Currency in which you operate your General Ledger, Tax Reports, etc.). The system also facilitates the operation of multiple Companies – each of which can have a different Base Currency, with the multi-company Consolidation features combining the results in the Group Company’s base currency.

Non-Base Currency Customers and Suppliers (Vendors) can be set up and dealt with in their own currency - which, to you, are "Foreign Currencies". When Transactions (Invoices, Credit Notes, Receipts or Payments, etc.) are raised against these foreign currency Customers or Suppliers (Vendors), they are raised using the currency of that Customer or Supplier (Vendor) and the Transaction also carries the Rate of Exchange in force at the time when the Transaction was raised, along with the equivalent calculated Base Currency Amount. (Note, if the transaction was backdated to an earlier date, it will still carry today’s Rate of Exchange – but you have the option to over-ride this Rate of Exchange in order to provide a more accurate one as at the date of the back-dated transaction).

Subsequently, when Payments are made or Funds received, they too will be in the currency of the Supplier (Vendor) or Customer and will also carry the Rate of Exchange in force at the time of the Bank Payment or Lodgement (and the calculated equivalent Base currency amount). In all probability, because of currency volatility, the rate of exchange at this time will not be the same as that of the original Invoice to which the Receipt or Payment is related. When the two are "Allocated" (or partially allocated) a Currency Gain or Loss will be automatically calculated by the System and posted to a Currency Gain/Loss in the General Ledger

From time to time, however, you can revalue any "Open" (i.e. Un-Allocated) Invoices, Credit Notes, etc. (and indeed Payments you might have received in advance or, which have not yet been allocated) to more accurately reflect the state of your Balance Sheet. When this occurs the system will automatically raise self-reversing Journals to the Unrealised Gains/Loss Account

Currencies and their Rates of Exchange are set up and maintained in Setup > Codes Maintenance > Currencies; Only one Currency can be nominated as the Base Currency and the Rates of Exchange are expressed as 1 Unit of Base Currency = X Units of Foreign Currency. In periods of high Exchange Rate Volatility, Currency Rates should be revised and updated frequently in order to provide the most accurate reflection of your Trading and Balance Sheet (also see 3. below). 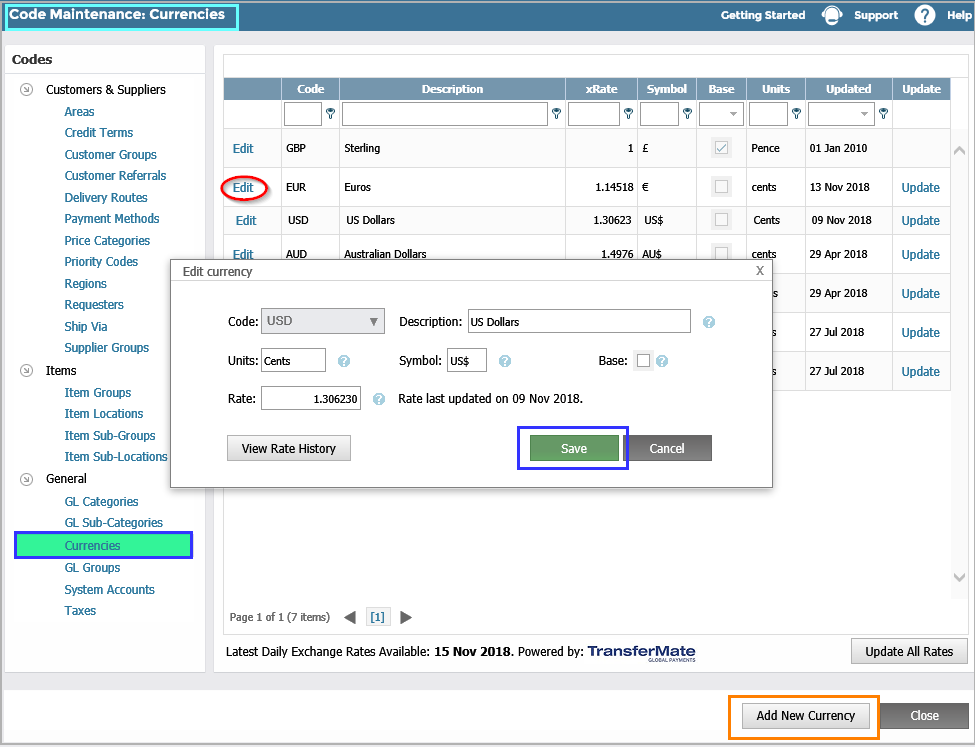 You can add new Currencies by pressing the button "Add New Currency" and choose the appropriate Currency Code from the Drop Down.  The remaining fields are auto filled apart from the Exchange Rate, but you can use the question mark symbols to access more detailed explanations.

Alternatively and optionally you can use this facility to automatically update your Rates of Exchange.  You can Update individual Rates of Exchange or Update the entire Table. These rates will then be used as the default rate when entering transactions.

Each night the system pulls in the Exchange Rates for a very large group of Currencies as of the close of the previous day and these are available for updating into your Currency Table. 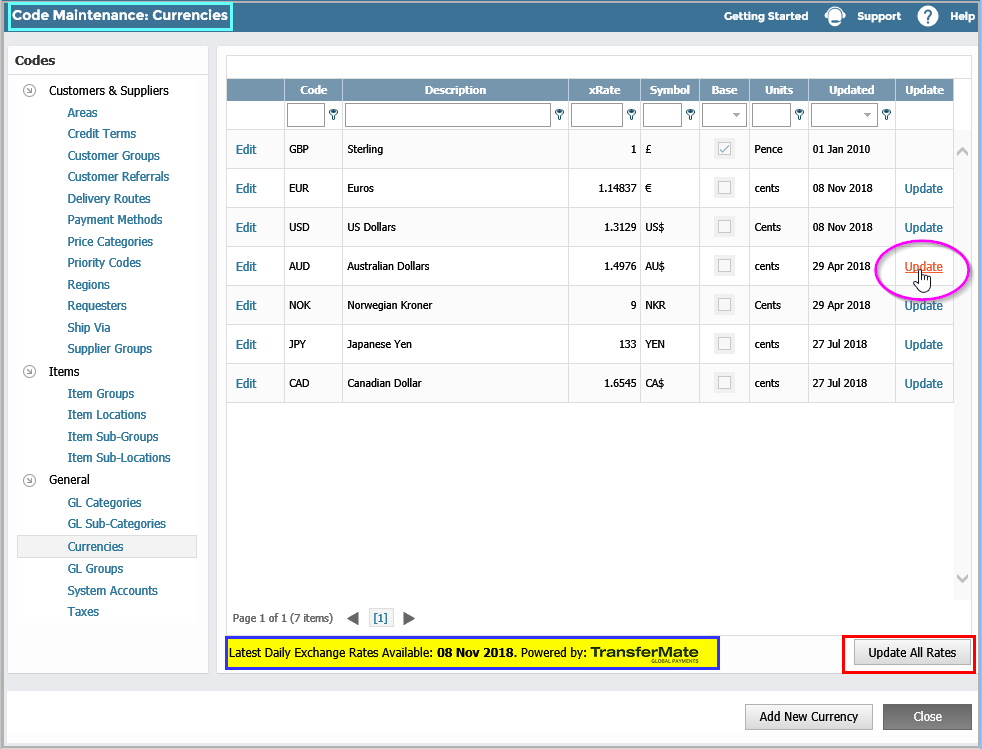 You can also access the History of Exchange Rate Updates from here; 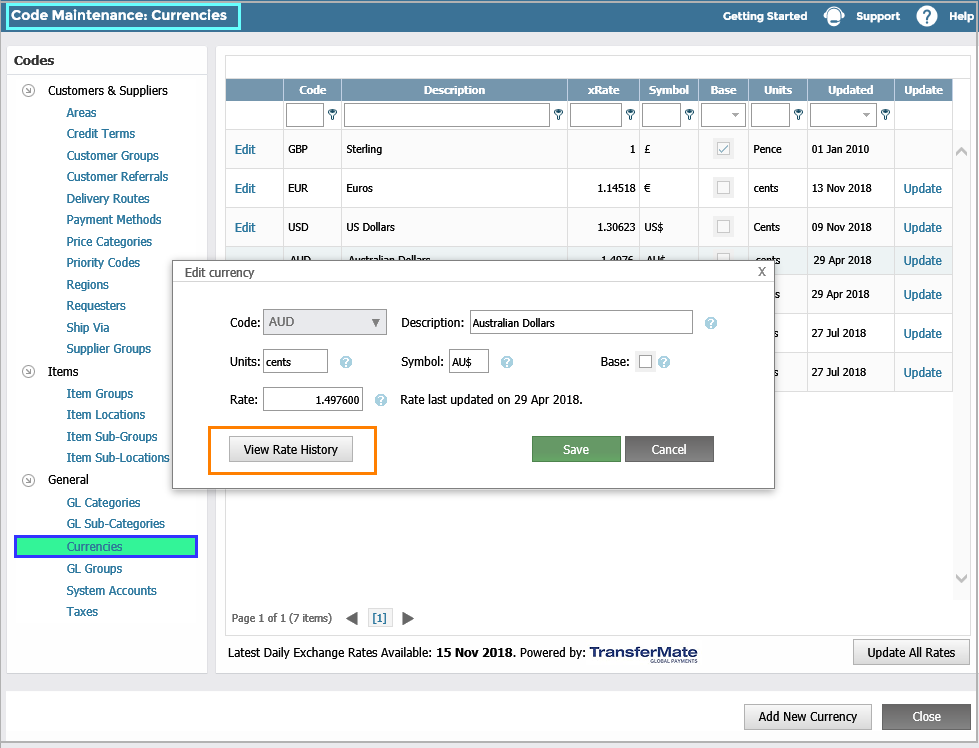 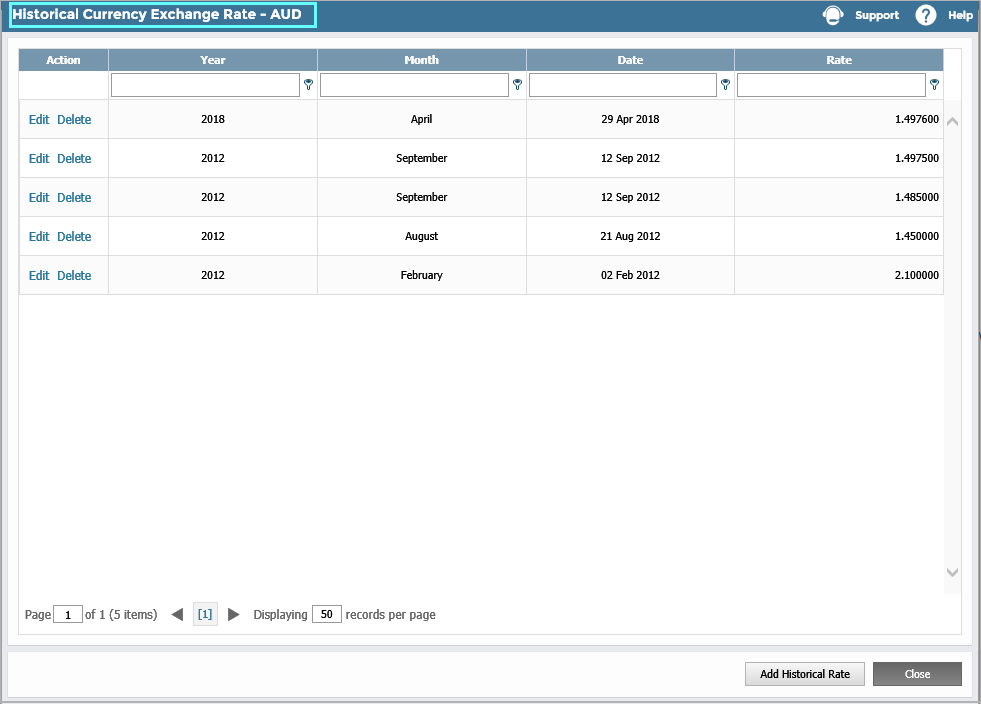 When you set up a new Customer or Supplier (Vendor), you must indicate that Customer’s or Supplier’s (Vendors) Currency on their Master record. (The Default Currency Code which is inherited either from Setup > Company Details & Settings or from Setup > Defaults > Customers ). You can specify the Currency from the DropDown List. 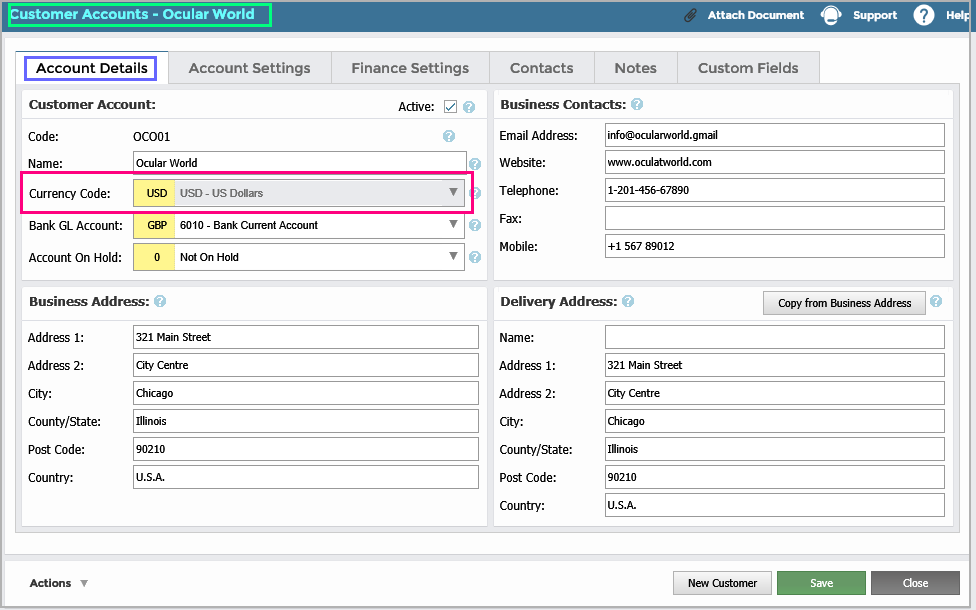 This Currency will then be presented as the Default Currency during Transaction entry. For example, in Customer Batch Invoicing; 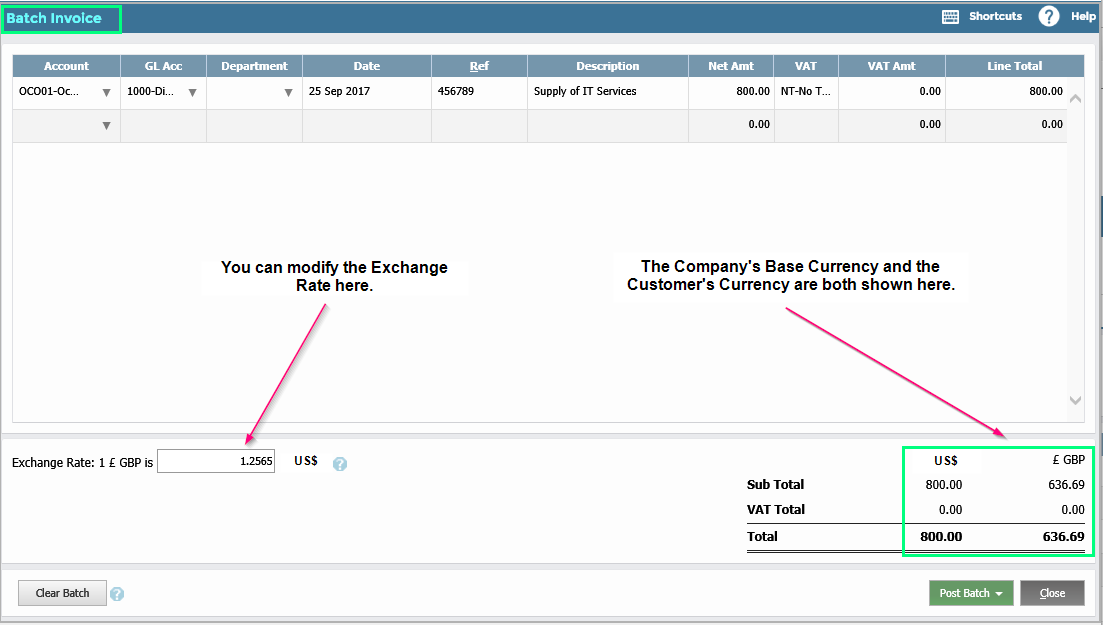 From time to time (usually towards the end of a Financial Period) you may wish to re-value the Open Items in your Ledgers to reflect the current exchange Rates rather than the historical exchange rates being carried with the foreign currency transactions. When this function is required go to General > GL Journals > Foreign Exchange Revaluation Journal;

In this example, we have chosen to re-value the Customers Debtors Ledger (AR), the Suppliers (Vendors) Creditors Ledger (AP) and all Bank & Credit Cards. You also need to select the next period end date. Both Exchange Gain/Losses Journals and Journal reversals will be generated at the same time. The generated Journals will carry this Period End Date and the generated Journal Reversals will carry the first date of the next Period.

Next, you need to enter the appropriate Exchange Rates against your Base Currency for each Currency in your System;

Click on the Edit function next to each currency in turn, and then enter the new Rate of Exchange, followed by "Update". The Historical Rates of Exchange carried on each transaction will remain untouched. Instead, the new Rates of Exchange will be compared to the Historical Rates of Exchange in order to calculate the Unrealized Gains or Losses Journals and their canceling Reversals. On choosing "Next Step" at the bottom of the screen, the system will present a report of the generated Gains or Losses for each Customer, Bank or Supplier (Vendor) for your appraisal. To actually generate the Accruals and Reversals you must now click on the "Generate Revaluation Journals" button at the bottom of the screen; 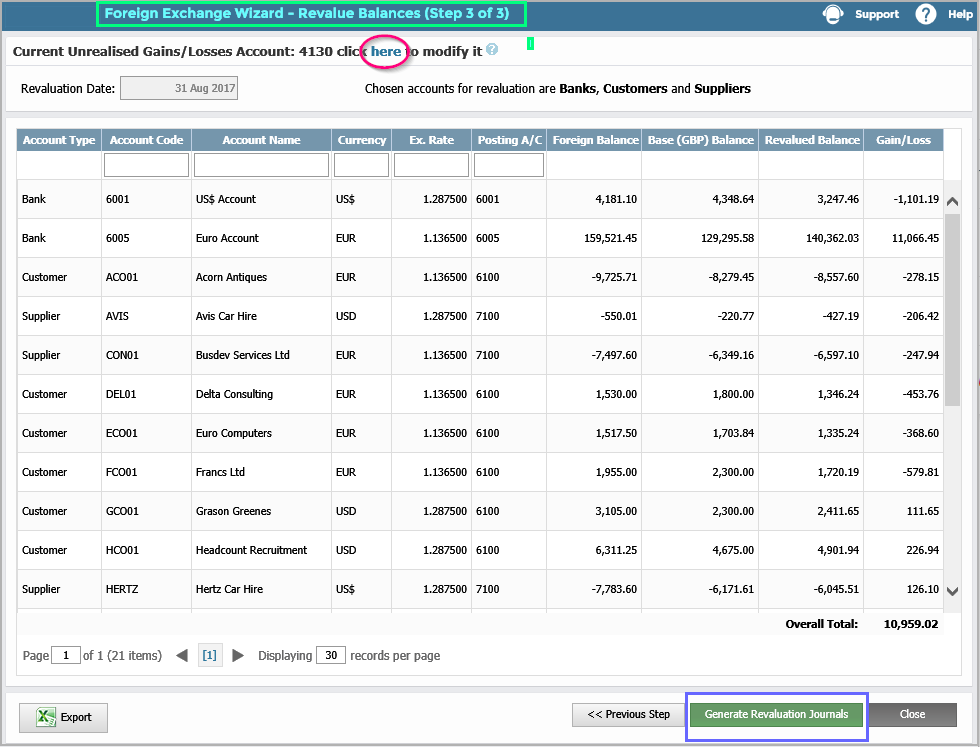 How do I Create Intercompany Charges using the Excel Template?

1.     Introduction: This is a highly functional alternative to the standard meth...

How do I carry out an Inventory Check or Stock Take?

1.     Introduction: As mentioned in the companion article “ How do I use the Inv...

How do I Maintain Customer Master Records?

1.     Introduction: Before you begin processing transactions through your Sales ...

How Do I Create User Customised Fields on Master Records?

1.    Introduction: You can now add your own Custom designed fields (i.e. additio...