Setting up Multi-Company Consolidation and Inter-Company postings can initially be a complex process. However, once implemented, processing is straight-forward.

There are several Administration System Layers:

The Practice, Franchise, or Corporate Administration Layer is Multi-Entity. A single Company can operate multiple entities, such as Locations, Branches, or Divisions, and treat them as if they were from separate companies. Although they could use Analysis Groups and Codes in the standard system, setting up discrete entities allows the use of individual sets of ledgers. A company can then consolidate these ledgers using Multi-Company/Multi-Entity Consolidation.

How to run the consolidation process in AccountsIQ (12.2) - AIQ Academy

How do I Set Up a New Company or Corporate Entity?‍

How do I Implement Extended Business Analysis?‍

How does the Practice/Group/Franchise Administration System Work? ‍

How do I use the Client Administration facilities to add Users and Control their Access Permissions? ‍

Setting up the Consolidation Group Company

Example: Consolidating Companies with a single Base Currency

In this example the three subsidiary companies all have the same Base Currency; Sterling. They can deal with foreign currencies in their own operating environment but must convert to the base currency of Sterling for consolidation. 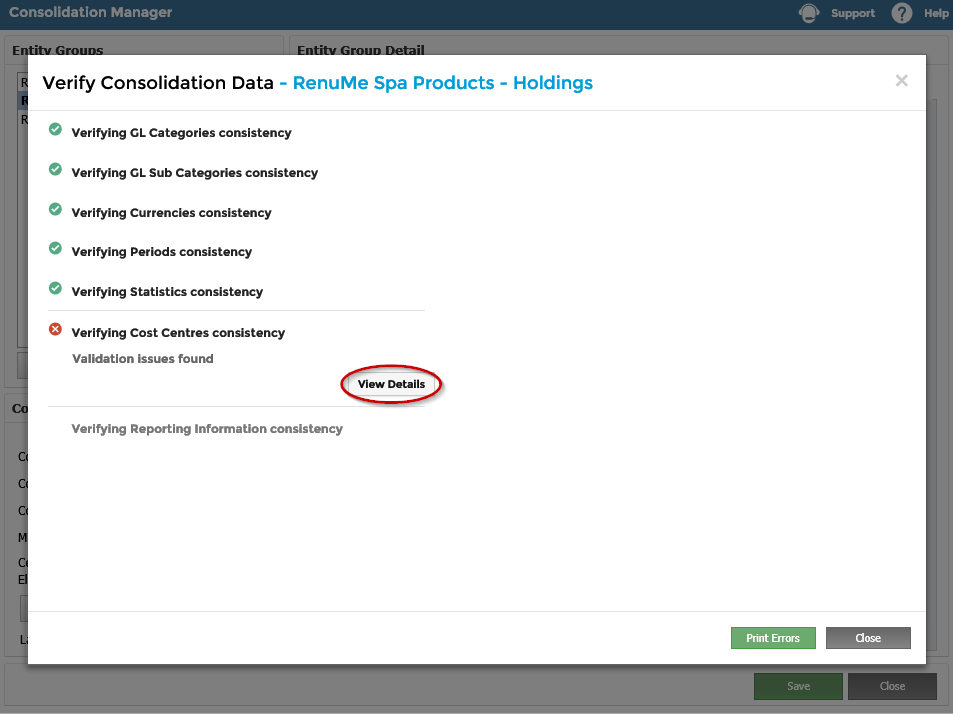 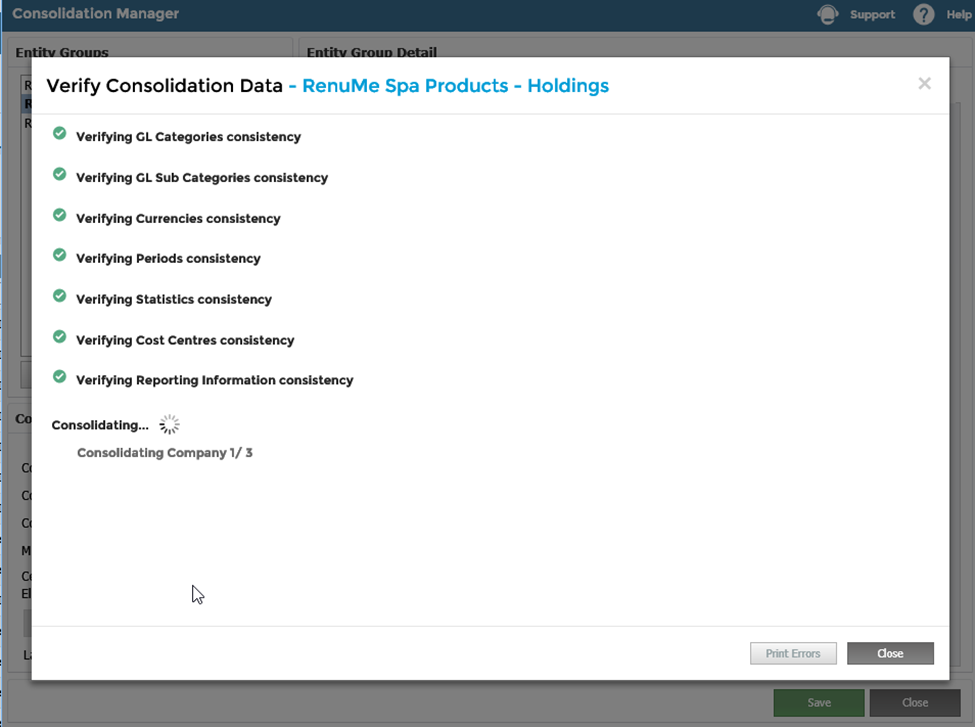 This process consolidates transactions in all prior open periods. Be careful with Back Posting and the Close Off of Periods. For example, you can Consolidate, Report, and Publish Profit and Loss and Balance Sheets in the Consolidating entity while the Subsidiary Companies continue to post into a Prior Open Period in their Ledgers. This can lead to inconsistencies between the Local and Central Reports.

AIQ recommends that, prior to Consolidation, each Subsidiary Company undergoes a Foreign Exchange Revaluation.

Log into the Subsidiary. Go to General > GL Journals > Foreign Exchange Revaluation Journal to calculate and post Realised and Un-Realised Currency Gains and Losses in each Subsidiary.

In this example, four subsidiary companies (Australia, France, Italy, and USA) have different base Currencies. The Group Company has Sterling as its Base and Reporting Currency. 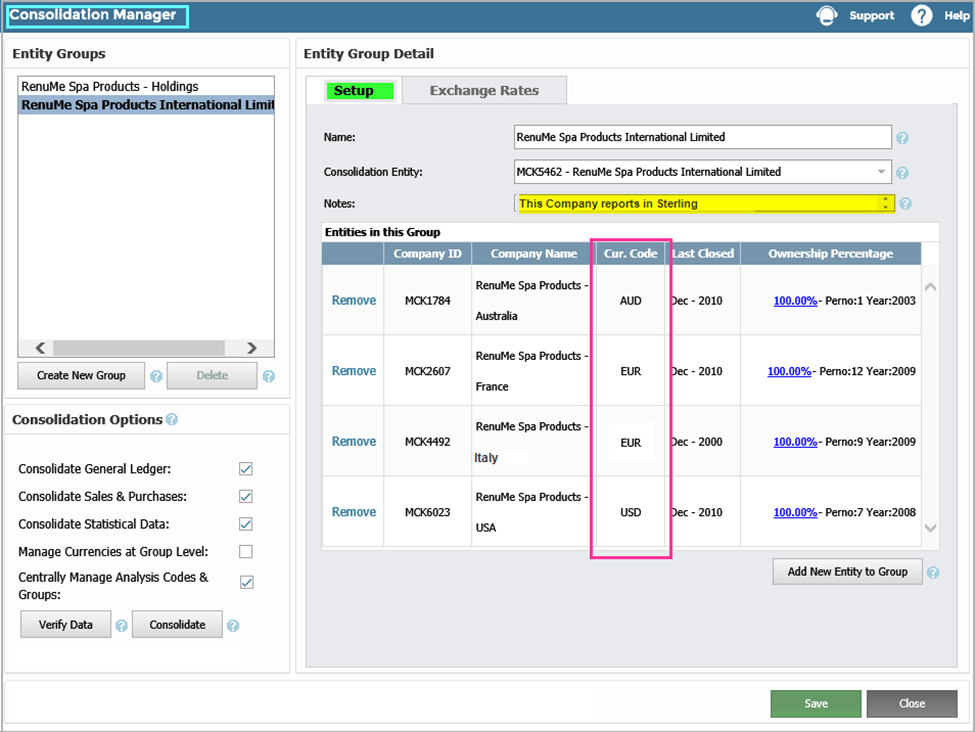 Set up subsidiary base currencies in the holding company

How do the Multi-Currency Features of the System Work?‍

To do this, RenuMe Spa Products Great Britain is used to consolidate: 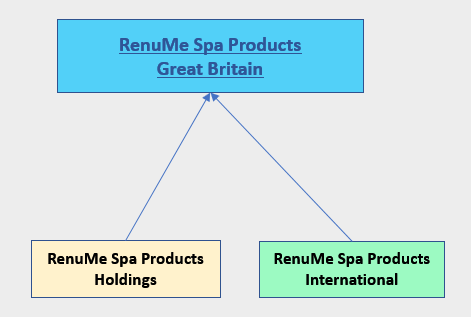 You cannot include a subsidiary company if it is already part of another consolidation. 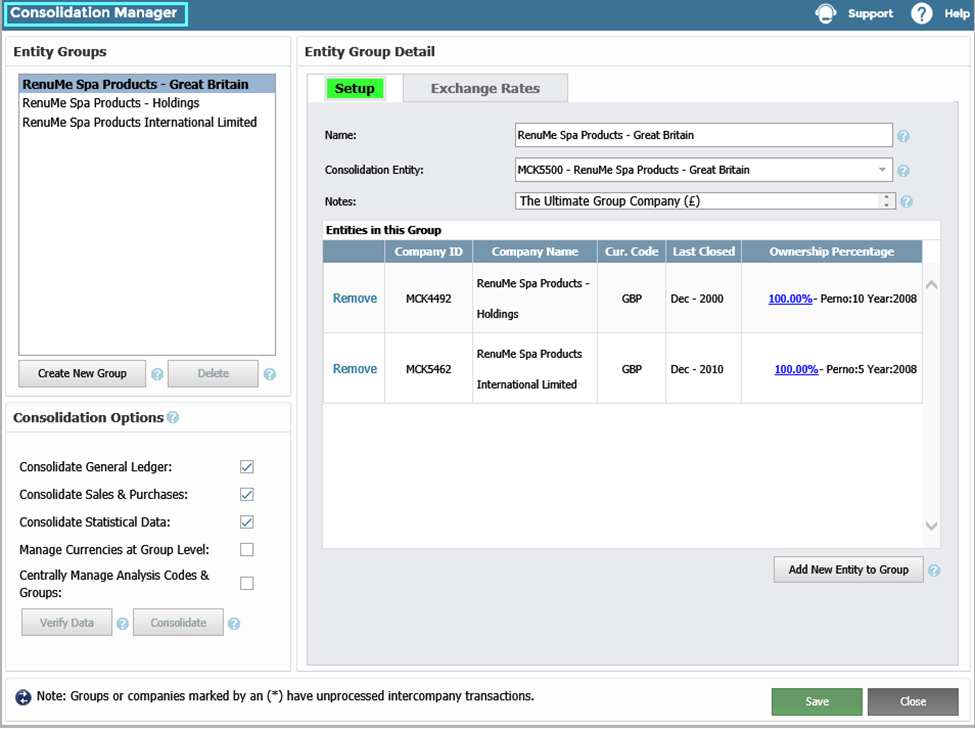 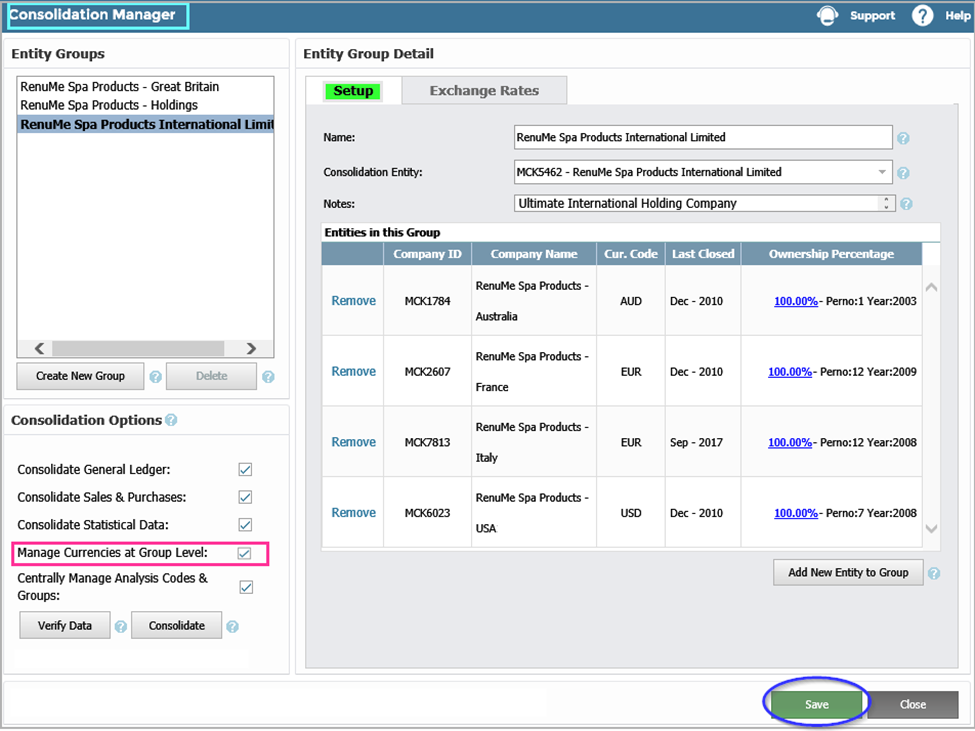 Only Currencies that are set up in the Group Consolidation Entity Tables are controlled centrally. There is still scope for Subsidiaries to set up and maintain other Currencies for Local Trading. If they do they should perform a Currency Revaluation before Consolidation. This ensures that non-centrally controlled currencies are converted at the latest exchange rate into the Base Currency of the Subsidiary before being consolidated at Group level.

Update the exchange rates manually in the Group Currency Table: 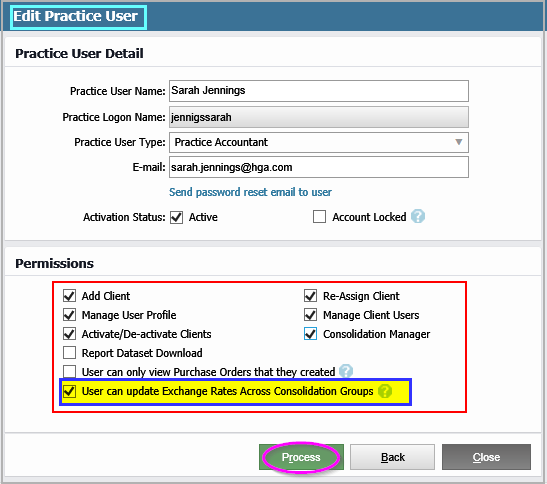 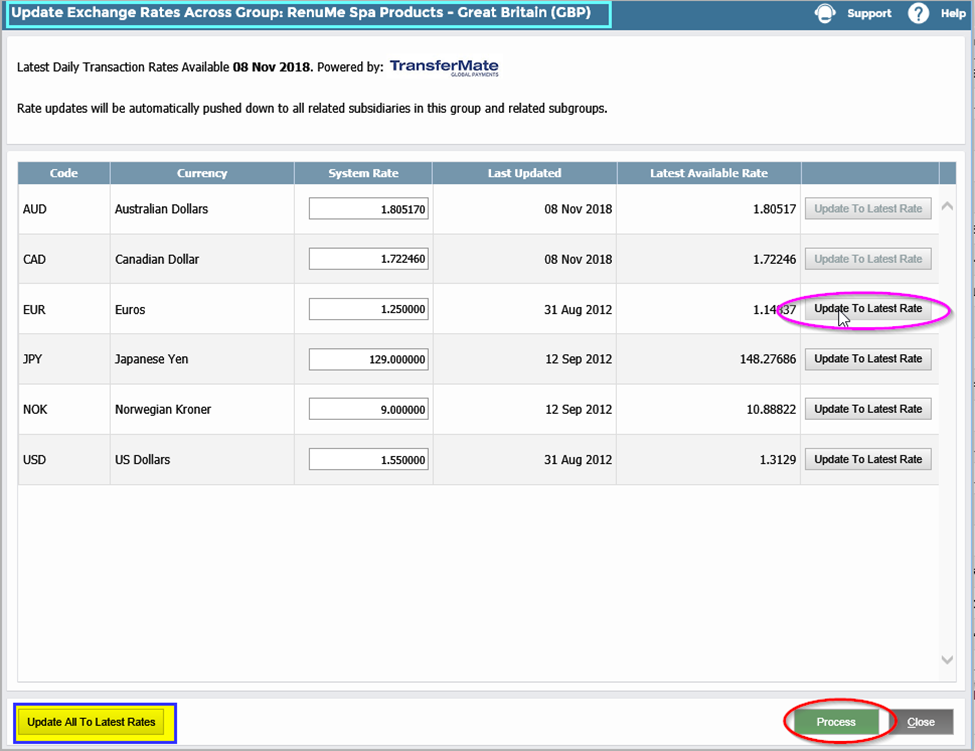 When you update an Exchange Rate in this Group Currency Table, such as Sterling to Euro (Sterling being the Consolidation Group Company Base Currency in this example), it will not just change the STG/EUR Rate in all Subsidiaries.

Exchange rates are interdependent so any subsequent change in the relationship between £ Sterling and € Euro will impact the $ Dollar to € Euro relationship. In this example:

Similar changes in the relationship between Sterling and the other Base Currencies will also cause modifications to ripple through other inter-currency relationships.

A Group Company Currency Table before and after exchange rate changes to the AUS Dollar:

Australian Subsidiary Company Currency Table before and after exchange rate change to the AUD Dollar in the consolidating company:

Normally, you should maintain Base Currencies centrally before setting up of the system. If this is not the case, you should be aware that in the Consolidation Manager:

How do the Multi-Currency Features of the System Work?‍

If you want to centrally manage and control Hierarchical Extended Business Analysis centrally from the Group: 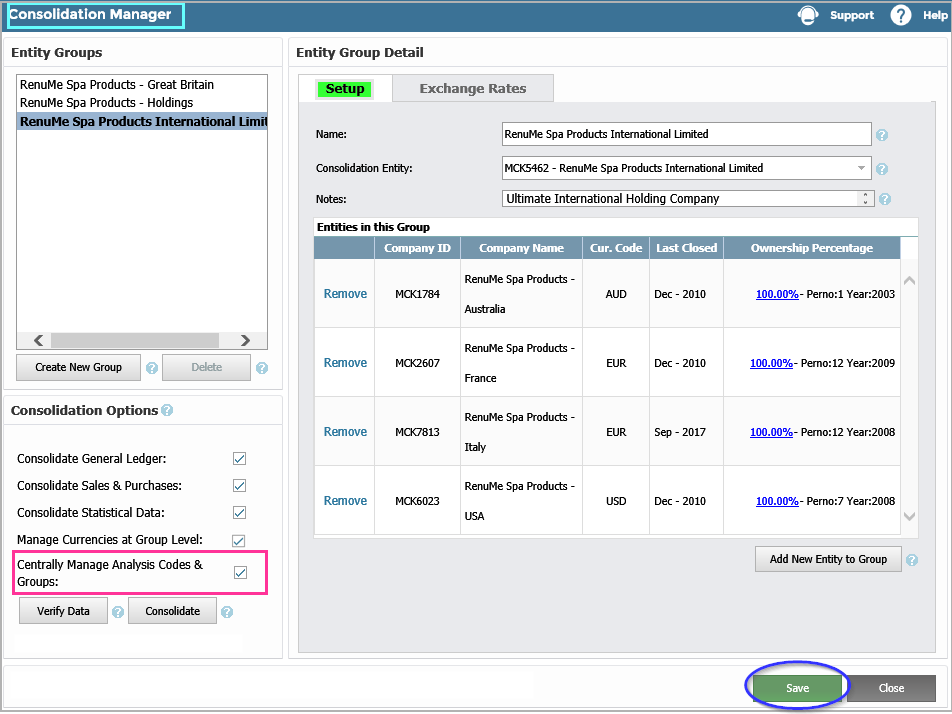 Now you can only maintain Dimensions and their Elements in the highest level Group Consolidation Company. The Subsidiary Companies will be denied access to the Setup and Revision of these Tables. However, the subsidiary companies still have control over the BI-Codes they wish to set up in their own company. If a BI-Code is set up in more than one Company, then its Parentage and Descriptions must be consistent throughout.

How do I Implement Extended Business Analysis?

1.    Introduction: Extended Business Analysis allows you to look at the performa...

How do I Create Inter-Company Transactions?

How do I Create Intercompany Charges using the Excel Template?

Introduction Note Before continuing you must understand the standard method of ra...